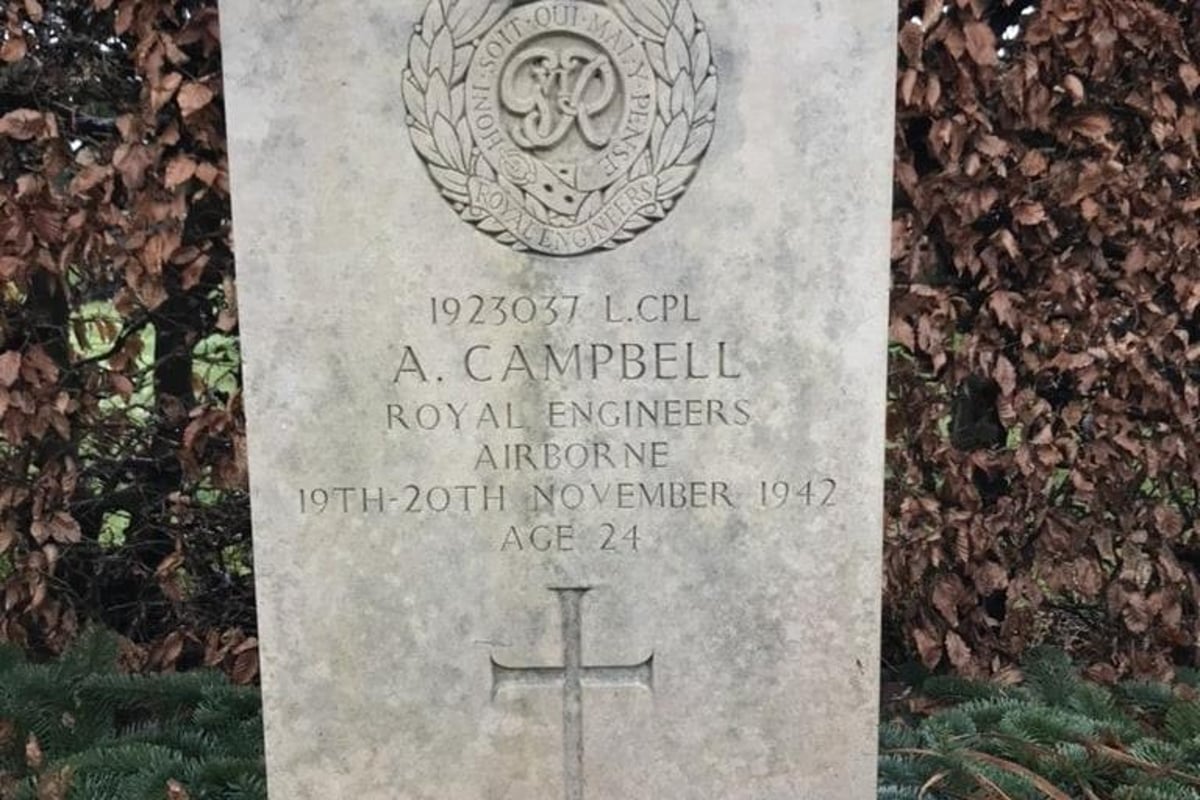 The fate of the free world hung in the balance when 24-year-old Lance Corporal Alexander Campbell of the 261st (Airborne) Field Park Company, Royal Engineers, joined his comrades on a mission to destroy the factory. Adolf Hitler’s ‘Heavy Water’ at the Norsk Hydro Industrial Complex near Vemork, Norway.

A specially trained demolitions sapper, young Alexander was part of the team that took off in a Halifax bomber – which towed a Horsa glider – from RAF Skitten, near Wick, on the evening of November 19, 1942.

Known as Operation Freshman, the mission sadly ended in tragedy.

Register to our daily newsletter The Falkirk Herald Today

Dr. Bruce Tocher, an oil industry professional and geologist, spent several years finding out all he could about those involved – including Lance Corporal Campbell – so that their heroism could be fully acknowledged.

Dr Tocher said: “Tragically, due to navigation and guidance system failures and extreme weather conditions, the aircraft failed to identify landing areas and was forced to turn back. .

“During the return, extreme icing of the tow lines caused both gliders to break away from their tugs and crash into the mountains of southeastern Norway.

“In addition, one of the Halifax bombers also crashed, instantly killing all seven crew on board.”

Of the 48 men who left RAF Skitten, 41 lost their lives, with only the seven-man crew of one of the four aircraft making it safely back to Scotland.

Of the 34 men in the gliders, some were killed instantly while the rest were executed by the Gestapo.

Among those murdered by the Nazis was Corporal Campbell, the son of Grangemouth couple Alexander and Catherine Elizabeth Campbell.

Fortunately for the sake of civilization as we know it, Hitler never succeeded in developing the atomic bomb.

Where Operation Freshman had failed, Operation Gunnerside was a great success – often referred to as the greatest commando raid in the history of warfare – and this was partly due to the lessons learned from the previous mission.

Unfortunately, Dr Tocher’s appeal – which appeared in The Falkirk Herald in early 2020 – did not lead to Lance Corporal Campbell’s relatives coming forward.

He now hopes a renewed appeal will bring someone before the 80th anniversary of Operation Freshman.

Dr Tocher said: “In just under 6 weeks, more than 50 relatives of British soldiers and Allied aircrew who took part in Operation Freshman will travel to Norway for a private visit to mark the 80th anniversary of this operation. stock.

“I have contacted relatives of some of the men and their family members will be coming to Norway in September to mark the 80th anniversary of the raid. During the memorial week, they will visit the sites where three of the planes crashed, the places where some of the men were executed and the Commonwealth graves where they are buried.

If you are a relative of Lance Corporal Campbell or know where his family members can be contacted, contact the Falkirk Herald and we will pass the details to Dr Tocher.