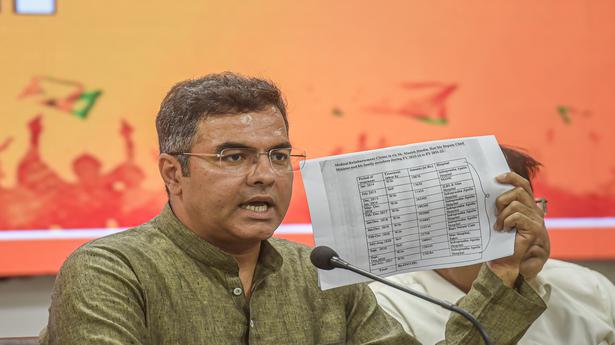 Mr Verma said Telangana has a “similar” excise policy and it has also been implemented in West Bengal.

“Family members of Telangana CM K. Chandrashekar Rao attended meetings on formulation of Delhi excise policy at a hotel. Family members of KCR got the same policy implemented in Punjab They have prepared a plan for Delhi with Manish Sisodia and Arvind Kejriwal,” Mr Verma alleged.

Reacting to a Look Out circular issued against Mr Sisodia, he said two defendants in the excise policy “scam” case fled the country as soon as the CBI began investigating the case.

“The surveillance circular was issued to prevent others from fleeing,” he said.

He also alleged that Mr Sisodia and his wife spent around Rs 22 lakh on treatment in private hospitals between 2014 and 2021, without benefiting from the services of public hospitals.

No immediate reaction was available from the Aam Aadmi party.