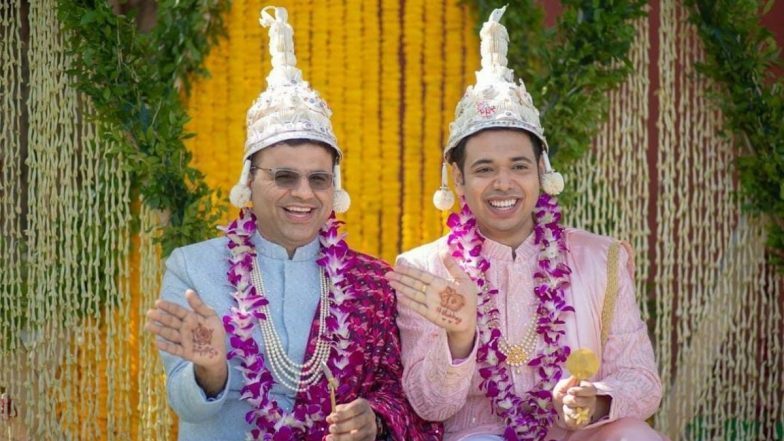 Hyderabad, December 20: For the first time in the Telugu states, a gay couple have married. Abhay Dange (34) and Supriyo Chakraborty (31) exchanged wedding rings and vows in a private ceremony held at a resort on the outskirts of Hyderabad on December 18. The wedding, which was attended by 60 family members and close friends of the couple, was celebrated by Sophia David, a trans woman from Hyderabad.

The ceremony took place with Bengali and Punjabi traditions. ‘Haldi’, ‘mehendi’ and ‘sangeet’ took place as part of the wedding celebrations which were also attended by members of the LGBT community in Hyderabad.

The duo, who met through a dating app, announced their wedding in October. Tollywood actress Samantha Ruth Prabhu had supported same-sex marriage and took to Twitter to congratulate the couple. According to Supriyo, their parents were not initially supportive, but later accepted their relationship. Same-sex marriages in India: What will same-sex and lesbian marriages look like off social media in a country that still struggles with interfaith marriages in advertisements ?.

(The above story first appeared on LatestLY on December 20, 2021 at 12:10 p.m. IST. For more information and updates on Politics, World, Sports, Entertainment, and Lifestyle , connect to our website Latestly.com).

Use of family planning methods in Ludhiana district: Survey: The Tribune India