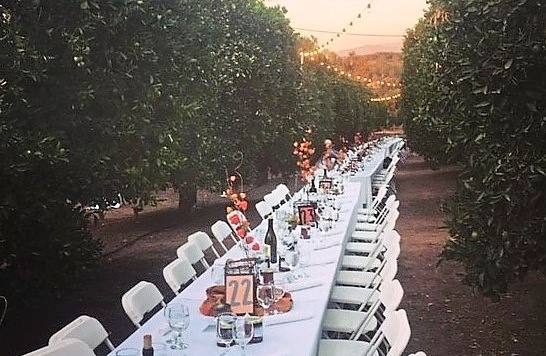 Family Service Association of Redlands will hold its annual dinner in the Grove fundraiser at 5 p.m. on September 24 at Jack and Laura Dangermond’s citrus grove in east Redlands.

The event begins with a social cocktail and a silent auction, followed by a gourmet buffet under the stars in the heart of the citrus grove.

Beer donated by Redlands Escape Brewery and wine donated by Family Service Association Board Members Lori and Rod Shelffo will be available throughout the evening, and a cash bar will be available for cocktails . Guests will also have the opportunity to participate in a wine tasting, according to a press release.

Dinner in the Grove also features a silent auction, offering items including dinners held in the Redlands area and a variety of artwork by local artists.

Daniel Gill, Art Director at Esri, who provided a painting of the new University of Redlands train station for last year’s silent auction, will again create a painting specifically for Dinner in the Grove.

The Studio Buckingham group has long supported Dinner in the Grove, contributing a variety of artwork for the silent auction, according to the press release.

Two nights at Mohonk Mountain House in New York State and three nights at Laguna Beach are also up for grabs.

Char Burgess and Shelli Stockton are the event chairs.

Tickets are $125 per person or $185 for a customer ticket, which includes reserved seating and a special gift. Reservations are required before September 7 at redlandsfamilyservice.org/dig or by calling 909-793-2673.

For terminally ill family members, here’s a 10-step estate and tax planning strategy to improve the total value of the TFSA