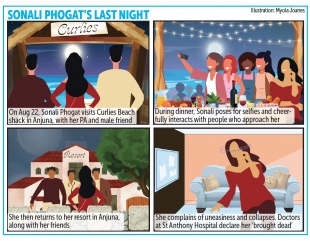 FIR under unnatural death recorded on complaint filed by relatives of Tik Tok star Sonali Phogat; the family insists that a murder complaint be filed; accuses the two men of drugging, raping and blackmailing her; calls for a CBI investigation

ANJUNA: The story of the death in Goa of ‘Tik Tok’ star and Haryana BJP member Sonali Phogat is getting more stained day by day. No one would have imagined that the stories and allegations surrounding his death and the final moments of his life would be much murkier than any of his social media reels.

In a grim turn of events, her family alleged that she was murdered by her personal assistant and male friend, with whom she traveled to Goa, unexpectedly and unannounced. One of her family members said the trip to Goa was unplanned and she was supposed to travel from Chandigarh, where she had gone to work for the BJP, straight to her hometown of Hisar in Haryana .

They alleged that PA Sudhir Sangwan of Phogat and his friend Sukhwinder Singh poisoned the ex-Big Boss contestant and demanded that the Goa police first register a murder case against them failing which they would transfer his body to AIIMS, New Delhi, for autopsy.

In a complaint filed with Anjuna Police on Wednesday, Phogat’s relatives said she spoke to her mother the night she died and complained of feeling unwell and developing chills after eating food that night.

Phogat’s family including his brother-in-law, cousin and brother Rinku Dhaga arrived in Goa on Tuesday but refused to come to Goa Medical College and Hospital, Bambolim to be present for the autopsy.

“We are convinced that these two people are involved in the murder. They planned this for a long time, but we never realized it. She spoke to us (her sister, mother, brother and brother-in-law) the day before she died and it was clear she was in trouble and anything could happen to her,” Dhaga said in her complaint. He added that Sangwan met Sonali in 2019 and has been working as her assistant ever since.

Chief Minister Pramod Sawant, speaking to reporters, said: “The DGP is watching it personally. Although it appears to be cardiac arrest, we are still performing the autopsy to determine the exact cause of death. An investigation is underway. »

“We have registered a case of unnatural death and once the autopsy is done, the report will determine the exact cause of death. Even to register a case of murder, we need the autopsy report, to understand if there is has a criminal act,” said PI Prashal Desai, the investigator.

Meanwhile, the police have registered a case of unnatural death and are awaiting the autopsy report to determine the exact cause of death. As the family did not go to the GMC, the medical team has not yet carried out the autopsy. As part of the investigation, the police are recording the statements, including that of the two people named in the complaint. “They have not been arrested or detained. They have been summoned to the police station as part of the investigation; they are being questioned,” said PI Desai.

The family also said Phogat was suspicious of her childminder, who sometimes used to cook her food. “She had told us several times that she felt uneasy and was shaking after eating food that Sangwan had given her. She wanted to return to Hisar and take police action against them, and we advised her to stay away from the two men and approach the police as soon as she returned. But she never came back,” Dhaga said.

Law enforcement sources confirmed that Sonali Phogat went to Curlie’s Beach Shack on Anjuna Beach for dinner, along with her PA and a male friend. People recognized her as a celebrity at the cabin and approached her for selfies, they said. She then returned to the resort town of Grand Leoney, complaining of being unwell, and then collapsed. She was taken to St Anthony’s Hospital, where doctors pronounced her ‘dead’.