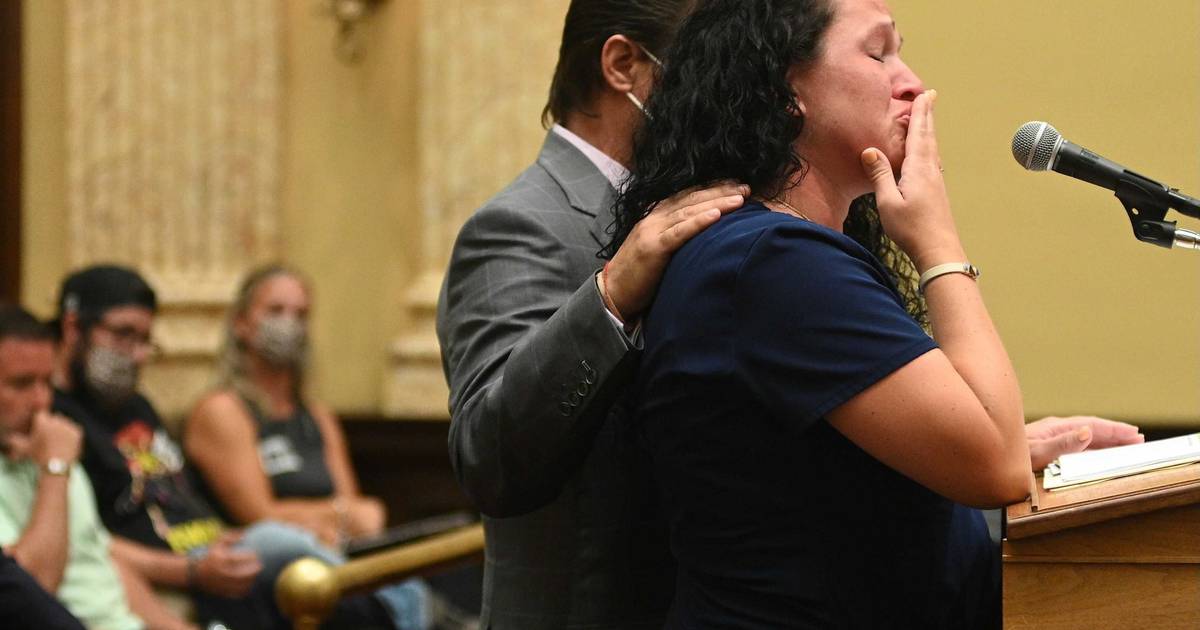 Lt. Paul Butrim, one of three Baltimore city firefighters who died in a fire in a vacant townhouse in January, will never hold his baby girl.

His wife, Rachel Butrim, discovered within the first month of his death that she was pregnant. The couple had already lost a young son.

Rachel Butrim and Lacey Marino, the older sister of Lt. Kelsey Sadler – who also died when the unstable vacant home suddenly collapsed – urged members of the Baltimore City Council on Tuesday to speed up the process of demolishing the derelict buildings so that other families never experience a similar tragedy.

“Council, I look forward to the day this is fixed. I know Paul would want to make sure this doesn’t happen again,” Rachel Butrim told the Council’s Economic and Community Development Committee.

Butrim, Sadler and firefighter/paramedic Kenny Laycao believed a person was inside a vacant three-story townhouse engulfed in flames on the morning of January 24. The building collapsed and trapped them just minutes after entering; the structure had previously collapsed in a fire in 2015.

“Council, where is the responsibility? asked Rachel Butrim. “I ask this question not just for my family, but for all past, present and future families affected by the city’s inaction.”

After the firefighters’ deaths, Mayor Brandon Scott tasked a task force of city agencies to recommend ways for each department to help solve a lingering problem in Baltimore – the existence of approximately 15,000 vacant and abandoned homes.

Council member Odette Ramos held Tuesday’s hearing to provide an update on how the task force’s recommendations have been implemented and whether there have been any immediate signs of improvement in the housing problem vacancies in the city.

The inventory of abandoned buildings is driven by population decline and has hovered stubbornly around 15,000 for decades. The majority of vacant homes, around 90%, are privately owned. The lack of city title to buildings creates a time-consuming and costly process to acquire properties for demolition or renovation, among other options.

But progress has been made since March to streamline the city’s ability to take over vacant properties.

Housing Commissioner Alice Kennedy said Tuesday that foreclosures in rem, a recently approved process for Baltimore, could significantly speed up how the city takes possession of vacant and run-down properties.

Foreclosure in rem is a type of tax sale foreclosure in which the city can remove vacant and derelict property if its liens accumulate to an amount greater than the property’s value from the tax sale.

A tax sale is an annual event where investors can purchase liens on properties with overdue taxes or other overdue encumbrances. Instead, the city can seize the liens on a property and take title to it.

The process, authorized by the state in 2019 and endorsed in Baltimore by legislation passed last session, only applies to vacant and abandoned properties — properties with vacant construction notices on which liens exceed the value of the property. Baltimore Circuit Court also recently created a separate docket dedicated to foreclosure cases.

So far, that’s dented the city’s inventory, Kennedy said. There are 14,780 vacant or abandoned properties, both public and private, down 210 properties from March and the lowest number Baltimore has seen in years.

“We haven’t been below 15,000 [vacant properties] for decades,” Kennedy said.

In three months, the city’s housing department carried out 60 demolitions and 48 emergency demolitions, including several vacant homes hit by a sinkhole that carved East North Avenue in East Baltimore this month. Eighty-eight other properties have been stabilized by repairing unstable roofs and walls.

Be informed of the latest news as it happens and informed about other must-see content with our free news alerts.

Kennedy stressed the importance of residents having home insurance and preparing an estate plan to prevent properties from becoming vacant in the first place.

But properties that have been abandoned, sometimes for decades, become safety risks for residents who live nearby and first responders who must enter them.

“Our lives will never be the same again because of this tragedy, which could have been avoided had the vacancies been resolved,” she added.

Ramos, after hearing how Sadler was a wife and mother, Laycao a fiancé with an upcoming wedding, and Butrim a father who didn’t yet know he and his wife were expecting, became emotional at the end of the hearing.

“It’s really important, it’s been important for decades. And we have to get it right.