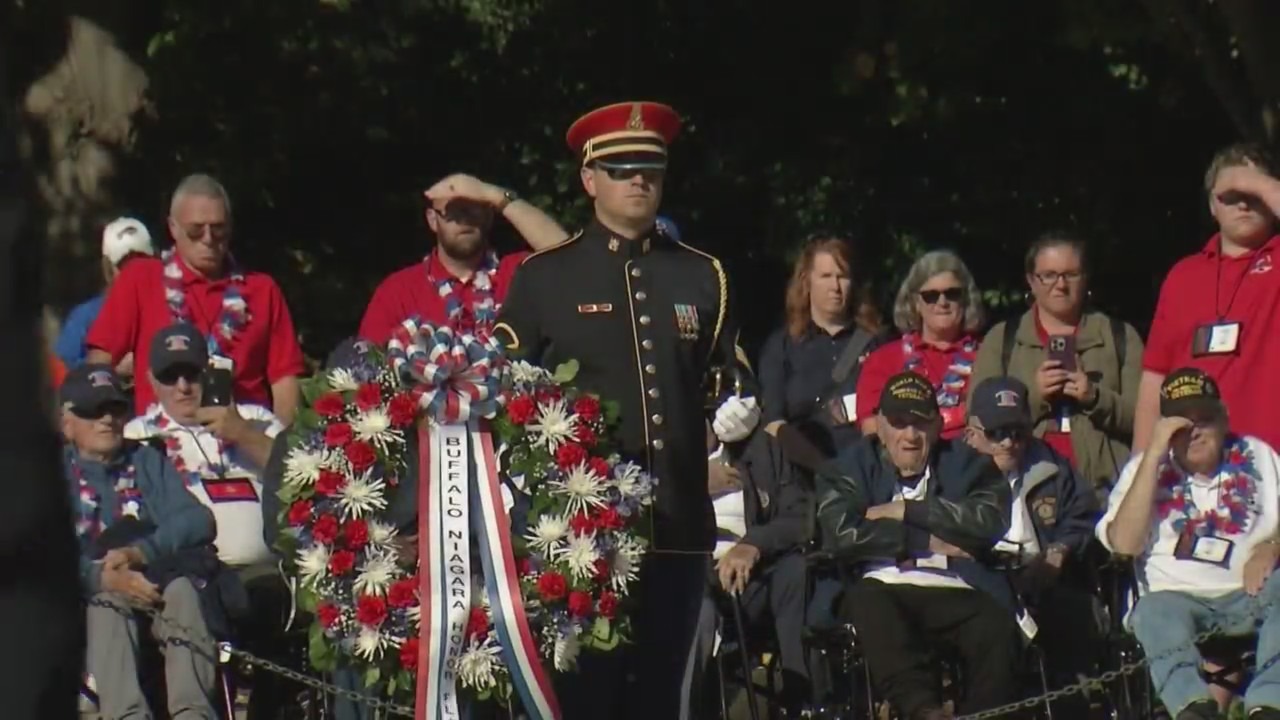 WASHINGTON, DC – News 4 brought you brave veterans who received the trip of a lifetime with the Buffalo Niagara Honor Flight. This family received quite a surprise during their trip.

Jim and David Miller are brothers who served in the military – Jim in Korea, David in Vietnam. John Backstrom is married to Jim’s daughter. He also served our country in the Air Force during the Vietnam War. The trio boarded the Honor Flight with a purpose.

They were asked to lay a wreath at the Tomb of the Unknown Soldier at Arlington National Cemetery.

“I remember when I was a kid, mom and dad took us to Washington a couple of times and we watched this procedure,” John Backstrom said. “I didn’t know I would be part of it.”

It was quite an honor for a family with such patriotic roots.

” What can I say ? I’m crying right now,” Grace Backstrom said. “When I got the call asking if the gentlemen might be doing this, I just stood there and cried.”

Although the family is united, things have not been easy for them. Three years ago Jim lost his best friend, companion and kindred spirit, his wife. His children say he struggled a lot with the loss.

“When he feels bad and thinks life is too much for him, we just say, ‘we still need you here,'” said Gayle, Jim’s daughter.

With the COVID-19 pandemic delaying almost everything, his daughters feared he wouldn’t be able to go on a trip.

“When you’re in your 90s, every day is a gift. And you just don’t know…” Kerman said. “COVID-19 kept him from going, so we thought, ‘hopefully he’ll still be here when they get going again.'”

So Grace and Gayle got to work – the family knew they had to mark the occasion. Along with siblings, nieces and extended family, they hatched a plan to surprise their veterans with an army of support. Their loved ones from across the United States came to see them lay the wreath.

“My dad didn’t know we were going to be here today,” Gayle said. “And my brother, who lives in the Philadelphia area, also came to see.”

“Some of them were just infants, children,” Jim said. “And others were older people. I had a hard time holding back my tears.

This once-in-a-lifetime journey and the outpouring of support during such a monumental day gave the whole family a boost of spirit.

“Seeing my grandfather with his great-granddaughter and his smile lighting up, you can tell it revives him too,” Gabrielle Schifferle said.

They all agree that it is a day they will never forget.

“It was a wonderful and remarkable experience,” said David Miller. “It’s beyond what I even imagined.”

Abby Fridmann is an award-winning presenter and journalist who joined the News 4 team in November 2020. See more of his work here and follow her on Twitter.