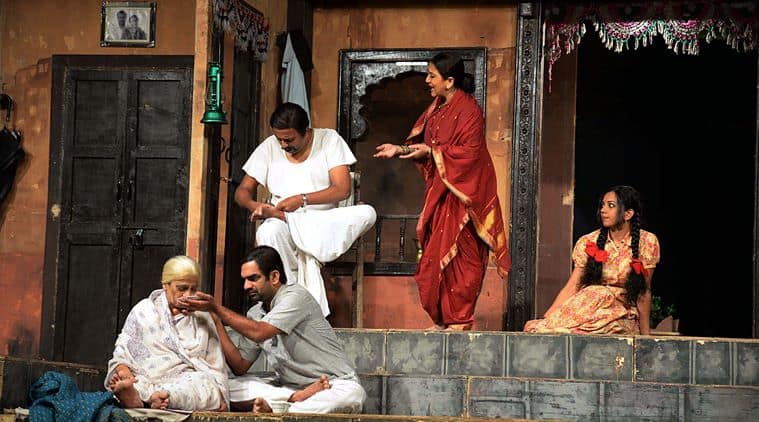 All in the family: a theatrical return to the common family system

At Dinanath Mangeshkar Natyagriha Hall in Vile Parle, Mumbai, the audience slowly arrives. There is room for 900 people inside and soon this space is almost completely filled. They are all there to get a taste of a “once in a lifetime” experience – watching a series of plays staged consecutively over a nine hour period. The pieces, directed by Chandrakant Kulkarni, are part of the â€œWada trilogyâ€. Written by acclaimed playwright Mahesh Elkunchwar, the trilogy features the classic Wada Chirebandi, followed by parts two and three, Magna Talyakathi and Yugant, respectively. The 78-year-old playwright, who now resides in Nagpur, has also to his credit such plays as Holi, which was later adapted into a film by Ketan Mehta; and Party, a satire on the urban artistic elite, which was Govind Nihalani’s sequel to Ardh Satya.

However, in the days of Netflix, expecting audiences to watch plays excessively is risky, Kulkarni admits. He was, however, confident that this could very well turn out because he relied, in part, on the rich Marathi tradition of watching nataks. He also relied on the novelty of the idea and the general popularity of the texts. â€œElkunchwar wrote Wada Chirebandi 35 years ago, but the play continues to be staged autonomously in different languages â€‹â€‹even today,â€ says Kulkarni.

Located in a wada (mansion) in a village of Vidarbha in the 1970s, Wada Chirebandi talks about the disintegration of the common family through the history of the Deshpande family. It all started with the arrival of Sudhir from Mumbai, five days after the death of his father. Joined by his wife Anjali, they must stay for the mourning period of 13 days. The family includes his mother, grandmother, single sister Prabha, older brother Bhaskar, wife and two children. The story revolves around relationships after Sudhir stepped back from any responsibility for the situation in his family home. The ruined building of the wadi becomes the symbol of changing times. Written in 1982, Wada Chirenbandi was first performed on stage in 1984, conducted by Vijaya Mehta.

During a short break, audience member Alka Kulkarni mentions that she has watched Wada Chirebandi before. But it still attracts her because it brings to mind the moments she saw. â€œThese events have happened in so many Maharashtrian families. The family members who remain in the village thought that those who moved to the city were doing well financially while those in the city did not understand the situation and the problems of village life, â€says Alka, in his fifties.

According to Mumbai-based playwright Ramu Ramanathan, the true sparkle of the play is in what happens offstage. â€œWith this play, Elkunchwar also addresses the futility of certain traditions, patriarchy and changing caste dynamics. The playwright was also able to foresee the implications of the migration from the village to the cities as well as the agrarian crisis in the region, things we are talking about today, â€he says.

The second in the trilogy, Magna Talyakathi, or â€œThe Pondâ€, talks about the aspirations of small towns, the rise of the nouveau riche and the general moral degradation of society through Bhaskar’s son.

Kulkarni says he was present at the first reading of the play at Shriram Lagoo’s residence in 1995: â€œWhen I heard Magna Talyakathi, I loved the progression of the characters and I wanted to bring it to life. scene. But Elkunchwar had one condition: that he stage the two parts together, with only a little break in between.

Kulkarni found support from Vijay Tendulkar, then head of the Mumbai-based theater group Awishkar, which was at the heart of the Marathi Experimental Theater. Awishkar stepped in to produce and while rehearsals for both pieces were in progress, Kulkarni was informed by Elkunchwar that he had written a third part, Yugant.

The first time the entire trilogy was staged so it was like an experimental play in 1999. It opened at Ravindra Natya Mandir in Dadar and was staged in Mumbai, Pune, Nashik and Nagpur.

His decision to re-stage the trilogy now, after all these years, is also due to its relevance. â€œIf my generation connects with Wada Chirebandi, the current generation of young people find their concerns reflected in Yugant,â€ says Kulkarni. A 45-minute piece composed largely of soliloquies and monologues, Yugant takes place in a dystopian future. It puts cousins â€‹â€‹Abhay and Parag, now in their 30s, face to face as they attempt to understand their roots and reassess their decisions.

However, current production has been scaled up on a larger scale and can therefore be considered more â€œcommercialâ€. Kulkarni understands that the challenges of staging the trilogy come with the added problem of holding the audience’s attention all those hours, and has limited the number of shows to 12.

However, the novelty of a trilogy was not a conscious conception on the part of the playwright. In his note to the recently published book Dayad, which archives the making of the trilogy, Elkunchwar acknowledges the criticisms of Magna Talyakathi and Yugant, and adds that the two pieces did not come from the desire for a gadget but from its creative nooks and crannies because that the characters refused to extinguish.

In fact, it would be fair to say that a lot of viewers don’t come for the writing of Elkunchwar but for the actors and for Kulkarni, which is a well-established name in commercial Marathi theater. Renowned Pune-based theater director Mohit Takalkar, who recently directed a new feature documentary on Elkunchwar, says: â€œElkunchwar is acclaimed, but not popular with mainstream audiences. This is because his plays tackle topics that make audiences uncomfortable.

Factors at play
* Mumbai has 12 to 15 auditoriums to stage Marathi commercial plays
* The annual turnover of the Marathi theater in 2015 was estimated at Rs 15 crore
* The city sees between 20 and 30 new productions each year
* A play is a success if it has more than 200 performances per year. Old plays like Vastraharan have been playing for years with over 5,000 shows

Disintegration of the common family system, emergence of the nuclear family