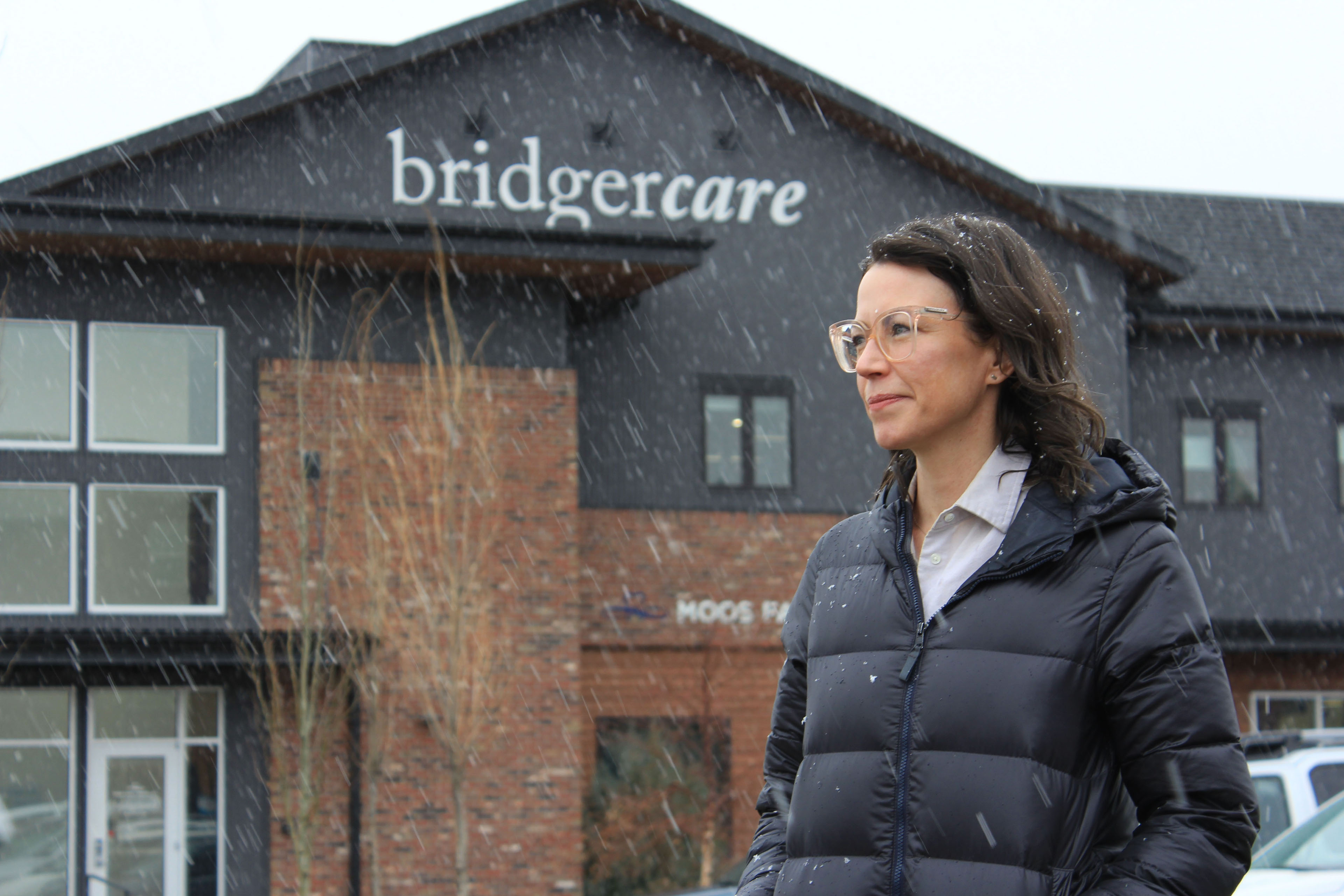 BOZEMAN, Mont. — In a bustling downtown cafe, a drawing of a ski lift with intrauterine devices for chairs catches the eyes of sleepy customers who start their mornings with a jolt of caffeine.

The flyer touts the services of Bridgercare, a nonprofit reproductive health clinic a few miles away. The clinic offers wellness checkups, birth control and LGBTQ+ services — and, as of April, oversees the state’s multimillion-dollar share of federal family planning program funding.

In March, Bridgercare beat the state health department to become administrator of Montana’s $2.3 million Title X program, which helps pay for family planning and preventive health services. The organization applied for the grant because its leaders were concerned about a new state law that sought to restrict funded local vendors.

What is happening in Montana is the latest example of an ongoing power struggle between nonprofits and conservative-leaning states over who gets federal money for family planning. This has intensified in recent years as the Title X program has increasingly become embroiled in abortion politics.

This year, the federal government set aside $257 million for family planning and preventive care. Providers who get this funding often serve low-income families, and Title X is one of the few federal programs that people without legal permission to be in the United States can participate in.

“The program is reaching into communities that otherwise would not be reached by public health efforts,” said Rebecca Kreitzer, associate professor of public policy at the University of North Carolina.

The Montana Department of Public Health and Human Services has controlled the distribution of state Title X funds for decades. Bridgercare sought the administrator role to circumvent a Republican-sponsored law passed last year that required the state to prioritize money for local health departments and federally qualified health centers. That would have put the nonprofit — which does not offer abortion procedures — and similar organizations at the bottom of the list. The law also prohibited clinics that perform abortions from receiving Title X funds from the state health department.

Bridgercare executive director Stephanie McDowell said the group applied for the grant to try to shield the program from decisions emanating from the state Capitol. “Because of the politicization of Title X, we see how it’s run, swaying back and forth based on partisan leadership,” McDowell said.

A spokeswoman for the U.S. Department of Health and Human Services, Tara Broido, did not respond to questions about whether the agency intentionally gave grants to nonprofits to avoid the politics of the government. ‘State. Instead, she said in a statement that applicants are assessed in a competitive process by a panel of independent reviewers based on criteria aimed at delivering high-quality, client-centric services.

Federal law prohibits the money from being used to perform abortions. But it can cover other services provided by groups that offer abortions – by far the biggest and best known is Planned Parenthood. In recent years, conservative politicians have tried to block these vendors from receiving Title X funding.

In some cases, contraception has entered debate around family planning services that the government should help fund. Some abortion opponents have raised concerns that long-acting forms of contraception, such as IUDs, lead to abortions. These claims are contested by reproductive health experts.

In 2019, the Trump administration introduced several new rules for Title X, including a ban on receiving funding from family planning clinics that also offered abortion services or referrals. Many clinics across the country left the program instead of complying with the rules. Simultaneously, the spread of covid-19 interrupted routine care. Number of patients served by Title X dropped.

The Biden administration rolled back most of those rules, including allowing abortion service providers back into the Title X program. States are also trying to influence the scope of funding, either through legislation or regulations. budget rules.

Title X’s current funding cycle is five years, and the amount of money available each year could change depending on the state’s provider network or federal budget changes. Jon Ebelt, spokesman for the Montana Department of Public Health and Human Services, did not respond when asked if the state plans to reapply to administer the funding in 2027. He said that the ministry was disappointed with the Biden administration’s “refusal” to renew state funding.

“We recognize, however, that recent changes to pro-abortion federal rules have distorted Title X and conflict with Montana law,” he said.

Conservative states have tangled with nonprofits and the federal government over Title X funding for more than a decade. In 2011, under the Obama administration, Texas cut state family planning spending and prioritized sending federal money to general primary care providers over reproductive health clinics. . As a result, 25% of family planning clinics in texas closed. In 2013, a non-profit organization now called Every Body Texas joined the contest to distribute the state’s Title X dollars and won.

“Filling and rebuilding these holes has taken the last decade, basically,” said Berna Mason, director of service delivery improvement for Every Body Texas.

In 2019, the governor of Nebraska proposed a budget that would have prohibited money from being given to any organization offering abortions or referring patients for abortions outside of an emergency. It would also have required funding recipients to be legally and financially separated from those clinics, a restriction that would have gone further than Trump administration rules. After, a family planning council won the right to administer Title X money.

In 2017, the nonprofit Arizona Family Health Partnership lost its status as that state’s sole Title X administrator when the state health department received 25% of the funding to provide to providers. It came after Arizona lawmakers ordered the department to request the funds and distribute them first to state or county-owned clinics, with the rest of the money going to primary care facilities. The change was backed by anti-abortion groups and reproductive health care providers saw it as an attempt to weaken clinics that offer abortion services.

However, the state left almost all the money he received intactand although he is still required by law to apply for Title X funding, he has not received a portion of the grant since.

Bré Thomas, CEO of Arizona Family Health Partnership, said that while the nonprofit is once again the sole administrator of Title X funding, the threat remains that some or all of it could be withdrawn because of politics. . “We’re at the will of who’s in charge,” Thomas said.

Nonprofits say they have an advantage over state agencies in expanding services because they have more flexibility in fundraising and fewer administrative hurdles.

In April, the Mississippi nonprofit Converge took over administration of Title X funds, a role the state had held for decades. The organization’s founders said they weren’t worried about conservative politicians restricting access to services, but simply believed they could do a better job. “The quality of service was very low and it was very difficult to get appointments,” said co-founder Danielle Lampton.

In Montana, Bridgercare plans to restore funding to Planned Parenthood clinics that have been cut from the program since 2019, recruit more health centers to participate, and expand program reach in rural, border, and tribal communities using telehealth services, McDowell said.

The organization’s goal is to increase the number of patients benefiting from the federal program by at least 10% each year of the five-year grant cycle. The clinic also plans to apply to retain its role in Title X beyond this grant.

“Five years from now, our grant application should be clearly in the lead for funding,” she said. “It’s less about ‘How do you beat someone in five years?’ And more on ‘How are we developing this program to serve patients?’

KHN (Kaiser Health News) is a national newsroom that produces in-depth journalism on health issues. Along with policy analysis and polling, KHN is one of the three main operating programs of KFF (Kaiser Family Foundation). KFF is an endowed non-profit organization providing information on health issues to the nation.

This story may be republished for free (details).

Rooted in Santa Barbara’s Past, Family Services Agency Adapts to Its Present and Future | Good for Santa Barbara